Learn more about how Achieve coordinated the work of twenty-six Lead State Partners and collaborated with critical partners, including the National Research Council, the National Science Teachers Association, and the American Association for the Advancement of Science, to develop the NGSS based on the NRC's K-12 Framework for Science Education.

The NRC, NSTA, AAAS, and Achieve completed a two-step process to develop the Next Generation Science Standards.

Step One: Getting the Science Right The NRC, the staff arm of the National Academy of Sciences, began by developing the Framework for K–12 Science Education. The Framework was a critical first step because it is grounded in the most current research on science and science learning and identified the science all K–12 students should know upon completion of high school.

To undertake this effort, the NRC convened a committee of 18 individuals who are nationally and internationally known in their respective fields. The committee was composed of practicing scientists, including two Nobel laureates, cognitive scientists, science education researchers, and science education standards and policy experts. In addition, the NRC used four design teams to develop the Framework. These design teams, in physical science, life science, earth/space science, and engineering, developed the framework for their respective disciplinary area. A public draft was released in July of 2010. The NRC reviewed comments and considered all feedback prior to releasing the final Framework on July 19, 2011. Read more about the Framework online here.

Step Two: States Developing Next Generation Science Standards In a process managed by Achieve, states led the development of K–12 science standards that are rich in content and practice and arranged in a coherent manner across disciplines and grades to provide all students an internationally-benchmarked science education. The NGSS are based on the Framework and will prepare students for college and careers. The NGSS were developed collaboratively with states and other stakeholders in science, science education, higher education, and industry. Additional review and guidance were provided by advisory committees composed of nationally-recognized leaders in science and science education as well as business and industry.

As part of the development process, the standards underwent multiple reviews from many stakeholders including two public drafts, allowing all who have a stake in science education an opportunity to inform the development of the standards. This process produced a set of high quality, college- and career-ready K–12 Next Generation Science Standards ready for state adoption. The standards were published on this website after their completion in April 2013.

NRC Fidelity Review As a part of the NGSS development process, the NRC convened a fidelity review of the final draft of the NGSS, comparing the standards to the vision outlined in A Framework for K-12 Science Education. The reviewers concluded that the NGSS are consistent with the content and structure of the Framework.

Click here for more information about the review process. 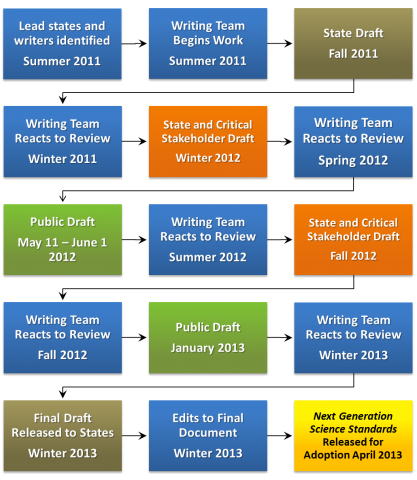 Read the Next Generation Science Standards and the Appendices.